Lord Morpeth’s Roll: A pre-famine census in the Russell Library

The conservation team is participating in a project involving the Russell Library, the History Department NUIM, Castle Howard in and Ancestry.com.

The Morpeth Testimonial Roll, wrapped around a gigantic bobbin, measures 412 metres in length and contains around 250,000 signatures gathered from across the whole of . It arrived in the Russell Library in 2009, when our role in the project officially began. 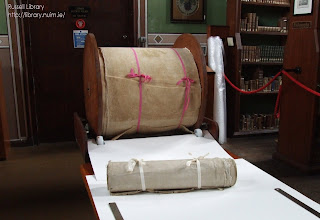 Created in 1841 at the instigation of the Duke of Leinster, Daniel O' Connell and others, this remarkable document marks the occasion of Lord Morpeth departing from his political office in .


The roll consists of 652 sheets of paper which were either signed in or sent out to the counties of for signing, and returned to for assembly. This remarkable feat was undertaken in the space of a month; from collecting the signatures to compiling the roll to constructing the wooden bobbin and chest. Some of the sheets still bear their postage stamps and franks, which are secondary additions of great historical importance as printed stamps were only introduced in 1840. 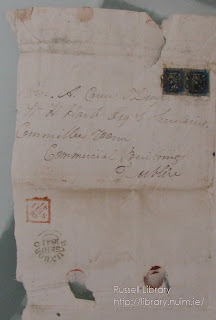 This photograph shows one of the sheets sent in the post.

The sheet was sent from Bailyboro, Co. Cavan to and shows both the old franking system and the new postage stamps. Postage stamps were used for the first time in May of 1840 when the penny black was introduced. In September 1841 this sheet was posted with 2d blues. Note that the stamps had to be cut with a scissors. It would be 12 years before Henry Archer invented the stamp perforating machine. 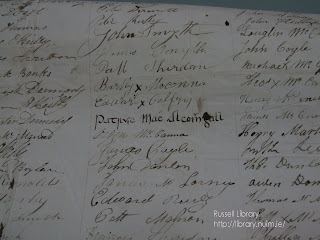 An Irish hand amongst the signatures 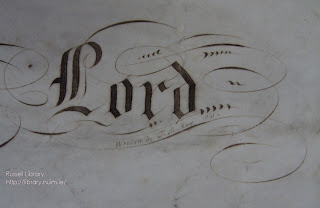 The address was written out by T.M. Ray and is both signed and dated within the flourishes of words ‘My Lord’.

The sheets are joined by glued paper strips, tail to head, originally creating a continuous length of paper which was subsequently rolled onto a wooden spool. The first two sheets boast an elaborately written address which opens with:

To the Right Honourable Lord Viscount Morpeth The Address of the Nobility, Gentry, Clergy, Merchants, Traders & People of Ireland 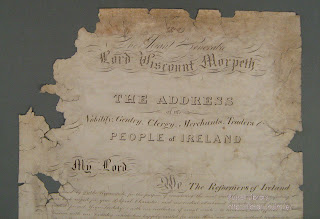 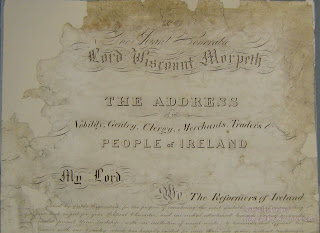 First Leaf of the Address Before and After Repair

The vast majority of the paper used is of good quality and retains much of its original flexibility. There are, however, a small number of fragile, chemically unstable, sheets.

The glue used to join the individual sheets has caused staining where it has been applied, though again, not universally. A small number of sheets exhibit staining across the entire surface despite otherwise being of good quality. Paper length and width are not uniform, nor are the weights of individual sheets. All these variables and complexities render the roll vulnerable to damage and degradation. Our role in this project is to facilitate an understanding of the physical object which will complement both research and the future curatorial care of the object itself.


Only during cleaning of the first sheet were gold embellishments to the title revealed, a glimpse into how lavish those first pages were. Edge repair of the sheet protects it from further damage and this combination of investigation, understanding and care are key to our conservation approach.